skip to main | skip to sidebar

A Gift of Honey 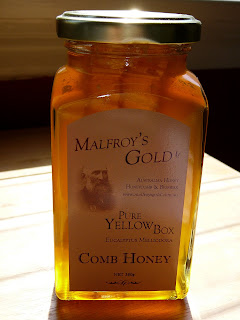 At the end of last year, Chez Pim organized the second annual Menu for Hope, a global raffle to raise money for the United Nations World Food Program. Food bloggers and generous foodies around the planet offered up mouthwatering prizes, and I was the lucky winner of three gorgeous jars of honey and a gooey honeycomb from Malfroy's Gold in Australia. This honey is made from eucalyptus and has a distinctive caramel flavor. In one word: addictive. 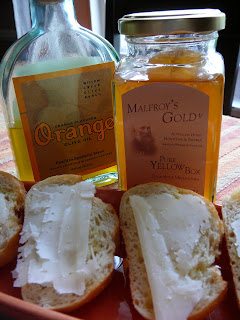 Not only did I have the pleasure of striking up an e-friendship with the owner, Tim, as we figured out how to get that honey from New South Wales to L.A., but I found many new uses for honey. Among my favorites:

- Slice a baguette and drizzle the slices with Pasolivo orange olive oil and honey. This is incredible in and of itself, but you can also top it with a sliver of Manchego like my sis did at our last dinner party, to give it another layer of flavor.
- I also recommend trying this Butternut Squash Bruschetta, which owes its unique flavor to honey, chili flakes and walnut oil. 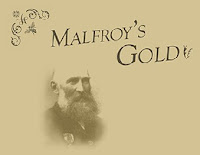 Pictures by Julie Fay. Check out more at Julie’s website
Posted by Kim at 6:29 PM 3 comments: 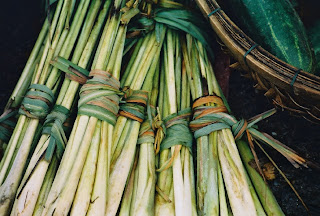 This is my confession: I lived in Southeast Asia for four years and didn’t learn how to cook a single dish. It was not until I returned to America, leaving behind corner stalls and their 25¢ meals, that I took on the cuisine in my own kitchen. Feeling the need to start with something simple, I announced to my friends that I was going to make tom kha gai, and everyone should drop by on Sunday night to marvel at my epicurean skills. I looked up a recipe for the popular Thai chicken-coconut soup online; gathered the garlic, ginger, and turmeric; and chopped and simmered according to the directions. Not only was it bad tom kha gai, it was bad soup. Some of the worst soup my not-so-diplomatic friends had eaten.

I was sad. I spent years in the tropics nurturing a love for the region’s complex fusion of salty, sour, hot, and sweet. The grit of ground rice powder, and the tang of lime. How could I have failed? As if I had been challenged, I started Googling, downloading recipe after recipe for tom kha gai, laying them out side by side on my kitchen counter, studying them in search of my Rosetta Stone.

Why did none of these new recipes mention turmeric? Why did some call for ginger and others for galangal? Maybe my failure was due to the kaffir lime leaves I wasn’t able to find. But could a leaf really make that much difference?

Armed with a recipe I cobbled together from my research, I accepted that my local Ralphs and Gelson’s grocery stores weren’t up to this project, and started investigating alternative markets. In a copy of Los Angeles Marketplace, I happened upon a recommendation for the Bangkok Supermarket on Melrose Avenue. Just past Western, it is a smog-stained white building topped by a nondescript sign that blends into the L.A. haze. It has an unimpressive, miniscule, door-ding parking lot, but the moment I stepped inside, I knew I’d found the pungent keeper of the secrets to tom kha gai.

Along with banana leaves, clay cooking pots for less than ten dollars, and the fleshy sweetsop fruit I thought I’d never taste outside Asia, I found kaffir lime leaves. A whole bundle for $1.19. And on the floor beneath them: a cardboard box filled with lemongrass at 39¢ a pound. Aisle B yielded half a dozen brands of nam prik pao. Who knew there were so many options when it came to chili paste?

I gathered excess amounts of everything I needed and headed back home. During the next month, fortified by visits to the Bangkok Market, I experimented. I discovered the necessity of the individual ingredients, their complements and contrasts, and why ginger is not galangal. Its spiciness lacks nerve. Ginger nips, but galangal bites. Those who think the fire in tom kha gai comes solely from its chilies are mistaken. It is chili combined with the slices of galangal that bring out the soup’s distinctive heat.

The kaffir lime leaves also work with their accompanying ingredients, providing a sherbet blend of citrus and cream. Tom kha gai may seem to derive its creaminess from coconut milk, but it is in fact the union of this milk with the leaves that give it its buttery undertone. The third essential fusion is lime and lemongrass. Both lend the soup a refreshing quality. But while lime provides tang, lemongrass counters with a soothing balm. Its fragrance reminds me of the subtle relief that nightfall eases through Southeast Asian cities.

The soup’s citrus, spice, cream, and heat require a final ingredient for balance: salt. But tom kha gai does not call for even a dash. Instead, it wants fish sauce, and when it comes to this stinky component, less is more. If you ever wonder if just one tablespoon is stingy, keep this in mind: It isn’t, and it never will be. One reeking pot of soup I made, which included a quarter cup, can attest to this. The Bangkok Market offers many kinds of fish sauce, and I recommend the Three Crabs brand.

It took me a few months to produce a tom kha gai that satisfied me like the soup I’d often had in Thailand. This is a long time to master just one dish, but I believed that it was worth it. So I returned to the Bangkok Market with my second recipe, for Laotian laap, and I calculated that at the rate I was going, I’d be ready in a year or two to throw a Southeast Asian dinner party. 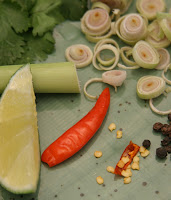 1) Place 4 of the kaffir leaves in a large saucepan. Add the coconut milk, chicken broth, galangal, lemongrass and chilies. Bring to a boil, then reduce heat to low and simmer for 20 minutes.

2) Strain out and discard all pieces. Bring the strained liquid to a boil. Reduce heat to medium to that it boils gently.

4) Boil gently until the chicken is cooked throughout, about three minutes.

Cut off the root tip, and then cut a two-inch piece (approximately one-third of the stalk) from this end. Peel off the outer layer. The inner piece is what you’ll work with. It can be sliced thin and tossed in marinades, or crushed with the flat of your knife to bring out the oil. You can also drop the crushed pieces with 2 sprigs of mint into a glass of iced tea, or alone into a cup of hot water to help you sleep.

Pictures by Julie Fay. Check out more at Julie’s website.

This essay was originally written for a food writing class and published on La Lunchbox. 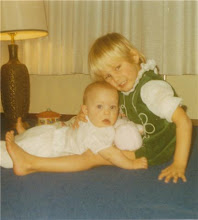